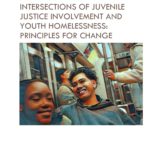 Addressing the Intersections of Juvenile Justice Involvement and Youth Homelessness: Principles for Change 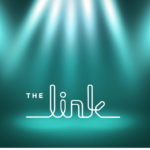 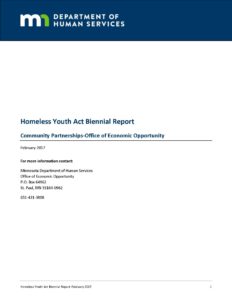 The Link is excited to share with you all the Homeless Youth Act Legislative Biennial Report.

What is the Homeless Youth Act?
“The Homeless Youth Act (HYA) provides definitions for runaway youth, homeless youth, and youth at-risk of homelessness, and defines the continuum of services for youth, including outreach, drop-in services, emergency shelter, and housing. In addition, the HYA affords funding to nonprofits and tribal governments to support the continuum of services.

The Homeless Youth Act was funded at $8.238 million for the 2016-17 biennium. All funds were distributed through a competitive Request for Proposals process. Thirty-nine proposals for youth programming were received, requesting over $16.6 million in funding; more than twice the requests as dollars available. Thirty-five agencies received funding. An additional $33,000 was appropriated by the Minnesota Legislature in spring 2016. These funds were used to support the Homeless Management Information System, the database that provided most of the demographic and outcome data in this report.

What is the report about?
This report outlines the needs and current realities for homeless youth in Minnesota based on the Homelessness in Minnesota—Findings from the 2015 Statewide Homeless Study1, as well as data from current Homeless Youth Act grantees. Research shows that on any given night, an estimated 6,000 Minnesota youth, who are unaccompanied by a parent or guardian, experience homelessness. This includes an estimated 2,500 minors age 17 and under and 3,500 young adults age 18 through 24. ”